The major features released in Jenkins v2 are Jenkinsfile and Pipelines. Today, we will see how to create a Jenkins job to build a docker container out of a source repository then upload it to an Amazon EC2 Container Registry.

The steps to install Jenkins v2 have not changed much and we deploy a familiar setup with Jetty as the .war runner.

The source code is hosted on separate server (GitHub in this case). Even though the current build workload does not stress the Jenkins server much, we stumbled upon enough issues with Docker to warrant running the build on a separate worker machine. That is also a straightforward way to deal with Docker cache growing out of proportion with each additionnal build.

We will add a few plugins to the base Jenkins install. 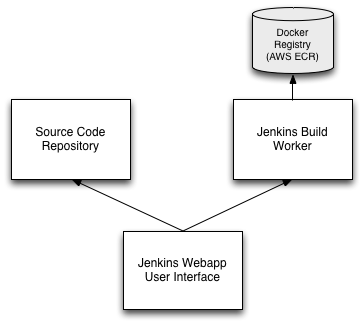 We want to control dissemination of credentials as much as possible. Keeping keys on the Jenkins Webapp server, the workflow will look like:

If we haven't done it yet, we will need to add the ability for Jenkins to initiate a connection to an HTTP server.

It is required to be able to call on the AWS API.

Before we can configure Jenkins to use the Amazon cloud, we will need to set some IAM policies in AWS.

We setup an instance profile specific to the worker machines so they can upload the Docker containers that have been built to ECR.

The build workers are created in their own security group with access restricted to the Jenkins server only.

We open port 22 for Jenkins to drop the bundle on the worker. We open port 80 because later on we will run unit tests against the webapp running in the Docker container that was just built.

We add the following permissions to the instance profile the Jenkins server runs on so that we can configure the EC2 Cloud (Manage Jenkins > Configure System) and start worker instances.

Note that without the PassRole, we won't be able to create a worker EC2 instance and associate a jenkins-worker role to it.

First we will need to build a worker AMI with all the required tools pre-installed (i.e. docker and awscli). We will also need to install java and wget for the Jenkins agent otherwise the job might spin forever with a "instance is offline" message.

In case you can ssh into the worker instance but there are problems with the Jenkins agent, take a look at the log in Manage Jenkins > Manage Nodes > the agent instance > See log for more details.

Once this is done, we browse to Manage Jenkins > Configure System, scroll down to the Cloud section and add an Amazon EC2 Cloud section.

Next we are adding an AMI and other parameters to

The Labels field is used by Jenkins to filter jobs. We will add it to our docker build job settings and set Usage to Only build jobs with label expression here.

The init script is minimal.

Once the cloud is configured, browse to Manage Jenkins > Manage Nodes, and make sure workers are set to "Provision via Amazon".

Ready to start! Through the Jenkins, we will create a New Item and select "Pipeline project". Let's use project as a substitute for the name of our project/repo and take a look at the pipeline script.

The first stage runs on the Jenkins webapp server. It will configure and prepare the code directory first (we use dws here but that is just specific to us). Then we create a .tar.gz bundle on everything that needs to be copied to the Jenkins build worker.

Side note: if our project clones the repository through a ssh command, we will need to have the keys available to Jenkins. Example:

The second stage runs on the Jenkins build worker. It will extract the bundle, build the Docker container and upload it to ECR. This stage requires that the Jenkins worker AMI was properly configured.

That's it. We now have Jenkins building a Docker image from a source repo and uploading it to ECR. Next we will see how to deploy that image and run tests against it.

If you are looking for related posts, Jenkins, SELinux and Python Coverage and Continuous Integration for a Javascript-heavy Django Site are good reads.